Our recent October trip through Great Smoky Mountain National Park coincided with a cold front that dropped considerable rain on the usually dry autumn mountains. My husband’s and my disappointment over gray skies soon turned to elation as we discovered full waterfalls and raging streams and rivers. Our travels along Little River Road on the Tennessee side of the park revealed the swollen Little River. Naturally, we stopped to take photographs. 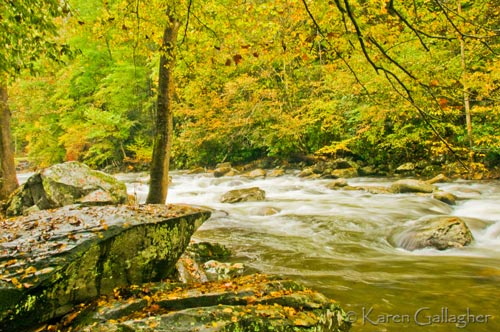 We were joined at one stop along the river by men in wetsuits. They studied the river, discussing passages around boulders and through whirling eddies. Above, an old tree stump seemed to look down on the visitors with a foreboding frown.

Curious, I asked one man about their intentions. Before jumping in his car, he explained that they planned to run the rapids in their kayaks.  I looked at the river and wondered how they could navigate such whitewater. Farther down the road, we noticed a collection of parked cars so we pulled over and hastened to the river to investigate.  Several whitewater kayakers gathered in the boiling water above a treacherous S-curve leading around a dangerous looking promontory. Later, I wondered if this was the legendary Mary’s Rock that hid a hole where a careless kayaker could be trapped. While I watched, the kayakers entered the downstream current one at a time for what must have been a thrilling ride.

This gentleman appeared to be the group’s leader. He was the first one through the rapids and he waited in an area of calm water until each person safely navigated the S-curve.

While searching for information on whitewater kayaking in Great Smoky Mountain National Park, I found an Extreme Kayaking You Tube video that you might enjoy watching. I believe it was taken at the same place on Little River.

I’m hoping to return to the park in the spring for a photography workshop when once again mountain fed rivers run full. I wonder what serendipitous experiences spring will bring to this mountainous masterpiece of creation.